Designing for excellence requires a disciplined approach of keeping the reliability of the PCB at the forefront of the design process. The performance of the PCB isn’t of much consequence if the board fails prematurely due to low-grade components or unaccounted for peak current and power requirements. Designing for overall excellence prepares the PCB for full production success and makes that prototype PCB capable of validating its manufacturability and testability. A reliability-first posture will deliver the performance you’re looking for at a reasonable cost.

Secret #1 – The Details of Component Selection

As mentioned, functional performance IS NOT the driving factor in selecting components. We can hang that on the increasing complication of the available components. There are more external factors that determine the lifespan of these devices, and they are related to reliability, which is why designing for reliability upfront is so important. So, what are these external factors?

All of these affect the longevity of the parts and can cause premature failure if the operating environment isn’t maintained to strict standards. There are a host of factors driving these issues. We’ll mention a few here for effect, but the list is much longer. In some cases, the question comes down to you don’t know what you don’t know.

Let’s take MSL as an example. The standard that exists as guidance is incomplete. J-STD-020D only applies to Surface Mount Technology (SMT) packages with integrated circuits. The chart shows the criteria, as stated in J-STD-020D. It does not cover passive components or wave soldering. If the component manufacturer has not given you an MSL for that component, then you are on your own to characterize what it might be. That is the physics of failure (PoF) process. Most standard components have a maximum MSL of three.

The potential damage when the MSL limit is exceeded is called popcorning because you will get cracking and delaminating of the PCB caused by moisture absorption in the dielectric material. The damage sounds like popcorn popping. Typically, this happens when PCBs are not packaged and stored correctly.

The PoF process is extended and involved would be a subject worthy of its own article. 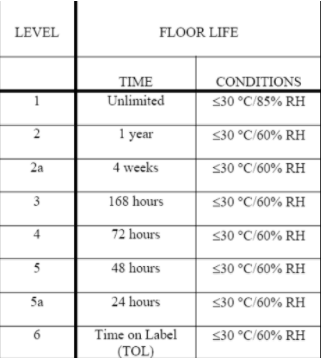 Secret #2 – Rules of Thumb as an Alternative to PoF

In all of these cases, risk must be evaluated. When the risk is too high for failure, the rules of thumb should be ignored in favor of a PoF calculation.

The best practice is to design for reliability upfront rather than dedicating all efforts to designing for performance. Your performance goals will be realized in the process because the components you will be choosing for high reliability will deliver the performance you want for a much longer time. Your customer will be twice as happy. Why? First, you will be keeping your production costs down. If you think in theoretical terms, you are beating the theory of the physics of failure to the punch.

This secret is a common-sense issue, but you would be surprised how often it gets messed up, causing expensive mistakes. From the design perspective, there are two roles on the team that MUST be handled the right way. The first role is the electrical engineer that will design the component structure of the circuit to be placed on the PCB. His/her job is to get the bill of materials (BOM) right and prepare the approved vendor list (AVL). Reliability and performance depend on it being a quality job. The second role is that of the mechanical engineer—today often played by an electrical engineer—who will determine the layout of the PCB, including all the conductive paths (routing), vias (holes through the board), and the preparation of the board so that the soldering job will be first class. This person will also handle packaging and storage requirements.

Organizing the production team is a good time to integrate PoF into the discussion because it explains the importance of secret #1 as well as the mechanism of making secret # 2 valuable. Reliability is not an exact science, but PoF provides a measure of the physical reliability involved in the PCB production process. PoF is somewhat of a collective term that includes chemistry and well as physics to get an understanding of the failure mechanisms of electronic components, including semiconductor devices. The scientific outcome of PoF is an estimation of the useful life of the circuit components under actual operating conditions. This also explains the importance of knowing the reliability of the components of the circuit.

This article only brushes over the top of all the issues of reliability to be considered. Avoid design mistakes as we talked about at the beginning of the article and design for reliability upfront. The performance will follow. Maximize your knowledge of the PCB design considerations and practice design for excellence at every opportunity.

✔ Design for Reliability is a valuable process for lowering cost, reducing time-to-market, and improving customer satisfaction
✔ PoF is a powerful tool that can leverage the value of design for reliability activities
✔ Successful Design for Reliability / PoF implementation requires the right combination of personnel and tools and time limitations