What is Controlled Impedance and How Is It Measured?

One of the most common examples of controlled impedance is the cable that connects the antenna to your television. That cable may be a coaxial cable consisting of a round, inner conductor, separated from the outer cylindrical conductor commonly called the shield by an insulator. The dimensions of the conductors and insulator, and the electrical characteristics of the insulator are carefully controlled in order to determine the shape, strength and interaction of their electrical fields, which will determine the electrical impedance of the cable.

Similarly, to achieve controlled impedance, there are many different trace configurations that are used in printed circuit boards. 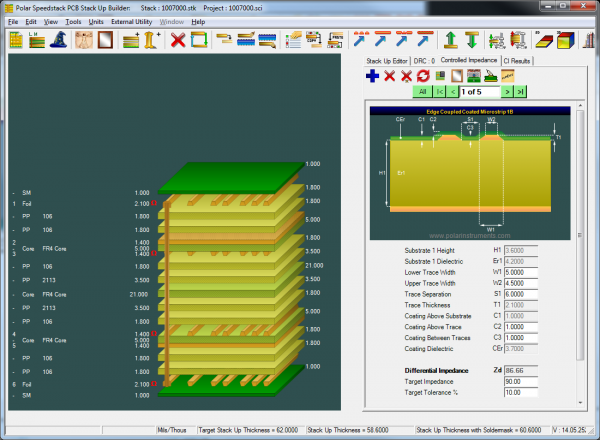 Controlled impedance boards use a plane layer as the shield, the laminate as the insulator and the conductor is the trace. The impedance of the trace on the board is determined by its dimensions and the materials used.

The parameters must be very carefully designed and then reproduced in the manufacturing process to ensure that the specifications are met.

This reflected signal eventually reaches the TV for the second time, later than the original, causing the TV to display multiple copies of the same picture: the original and the delayed reflected signal, much like an echo. If the signal had been carrying sensor information to your car’s fuel injection system through a series of circuit boards and wires, parts of that data might bounce back and forth a few times, causing your car to stop running smoothly.

Exactly the same factors apply to signal transfer through traces on a printed circuit board. Traces that carry signals containing high frequencies, must be designed to match the impedance of the driver and receiver devices. The longer the trace, or the greater the frequencies involved, then the greater the need to control the trace impedance. The board manufacturer controls the impedance by varying the dimensions or cross-sectional area and spacing of the trace or laminate. 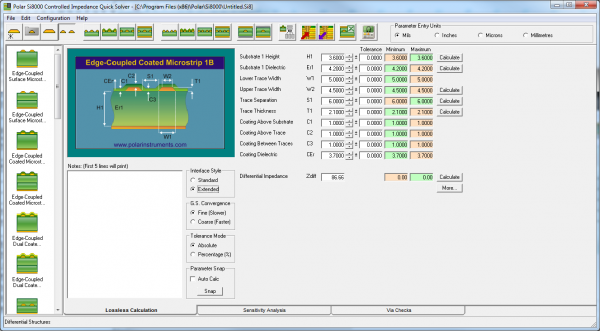 Unmatched impedance issues will be very hard to evaluate once the board is loaded with components. Components can have a range of tolerances; one batch may tolerate an impedance mismatch, while another might not. A component’s characteristics may change with temperature, and problems may come and go with the variation in the operating temperature of the assembly. In this case replacing a component might appear to fix a problem, causing the components to become the suspected cause instead of the trace. Additional costs for components and assembly might result when the real problem is a trace impedance mismatch. It becomes imperative that the PCB designer specify trace impedance and tolerance, and the board manufacturer must meet those specifications.

As the operating speed of electronic circuits has increased, so has the need for printed boards to have controlled impedances and, therefore, the majority of board manufacturers are producing them.

Impedance depends on many parameters, including but not limited to trace width, trace thickness, and laminate thickness. The dielectric thickness, Dk, trace width, copper weight, and any special parameters are all taken into account when calculating impedance. The trace width can then be adjusted in order to get your desired impedance.

Determination of the acceptability of the boards is done through testing procedures. However, the testing is not usually performed on the actual board but on one or more test coupons manufactured at the same time and on the same panel. Coupons are used because controlled impedance traces are not always easily accessible for testing, nor do they meet the requirements for length and have no branching trace work or pads to allow for the testing.

The typical test coupon is a board built with exactly the same layer and trace construction as the product board. Coupon traces are designed to be the same width and on the same layer as the controlled impedance traces on the board along with the same aperture codes (D-code) and planes.

Controlled impedance coupons are usually found at each end of the production panels to help ensure that the coupons represent the whole panel. Testing the 2 coupons will verify to a high confidence level that there are no variations in trace width, trace thickness, laminate height, etc., over the panel. Many board manufacturers use the measurement of test coupons panels to check the overall quality of the product resulting from their processes. Such testing can be a very accurate measure of consistency of production without sacrificing a board to micro-sectioning. 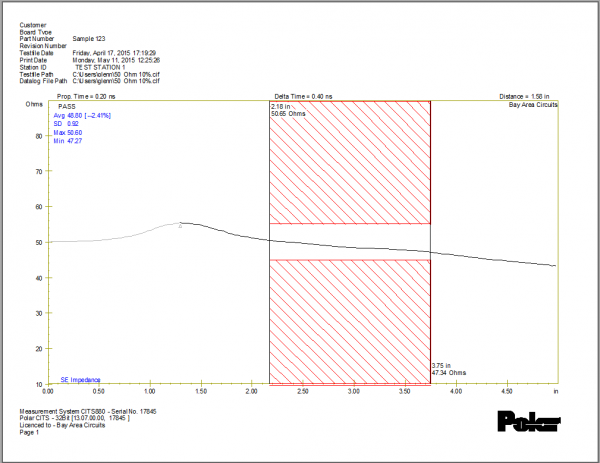 Sample Results from a TDR Test

Network analyzers and laboratory TDRs are highly complex and sophisticated laboratory instruments that typically need to be operated with great care by a skilled engineer. A controlled impedance test system that uses TDR measurement techniques and is specifically designed for measuring controlled impedance on printed circuit boards is the most common equipment used in the industry.

A TDR applies a very fast electrical step signal to the coupon via a controlled impedance cable and matching impedance probe. Whenever there is a change in impedance value, part of the signal power is reflected back to the TDR and is measured by the instrument.

Think of the TDR as a radar or sonar station that broadcasts a signal either through the air or water in the case of sonar. When that signal strikes an object, it is reflected back to the signal emitting station and converted to a “blip” on a screen and/or an audio tone. The time delay between the transmitted pulse and the receipt of the reflected signal is proportional to the distance to the object and can indicate its direction, speed and so on. A TDR transmits its signal along a trace and when it encounters an anomaly, part of that signal is reflected back to the instrument. The magnitude of the reflected signal is related to the value of the discontinuity. Changes in the cross-sectional area of the trace, distance to its plane or return path or proximity to other pads and traces will all cause a change in the impedance and cause a reflection. From the data, it is possible to graph the impedance and its variation. At that point the information will be evaluated by the board manufacturer.

If it falls within the tolerance levels established by the board designer, then the panel of boards is accepted. Failing to meet the specification may result in further processing and or evaluation of the materials and equipment used to manufacture the panel. It is also best to have the TDR testing done in house rather than as an outside service.  This allows for in process testing and better control and speed of manufacturing.  Bay Area Circuits does all TDR testing for controlled impedance in our in-house lab.

Have questions about specifying controlled impedance for your next design? Give us a call and we can help you out!

An Introduction To Controlled Impedance For PCBs
Picking The Right Trace Width For Your Next PCB Design
Rogers Material: Right For Your Next RF Project?